Fescue toxicity is the most costly grass-related disease in the United States. Cattle consuming endophyte-infected fescue experience production losses exceeding $600 million per year. Fescue is commonly grown throughout the midwestern and southern United States and accounts for more than 40 million acres of forage land (see Figure 1). Tall fescue is a cool-season perennial grass. Tall fescue has long been associated with a syndrome known as fescue toxicosis (a.k.a. “fescue foot” or “summer slump”). An endophyte fungus within the fescue plant causes fescue toxicosis. This endophyte produces alkaloids that cause adverse symptoms in grazing livestock, including decreased weight gain or even weight loss, decreased feed intake, reduced milk production, higher body temperature, increased respiration rates, rough hair coat, unthrifty appearance, loss of blood flow to the extremities, excessive salivation and poor reproductive performance. These symptoms seem to be exacerbated during extremely warm or cold temperatures. Table 1 illustrates the differences in weight gain in steers on both high- and low-endophyte fescue diets. 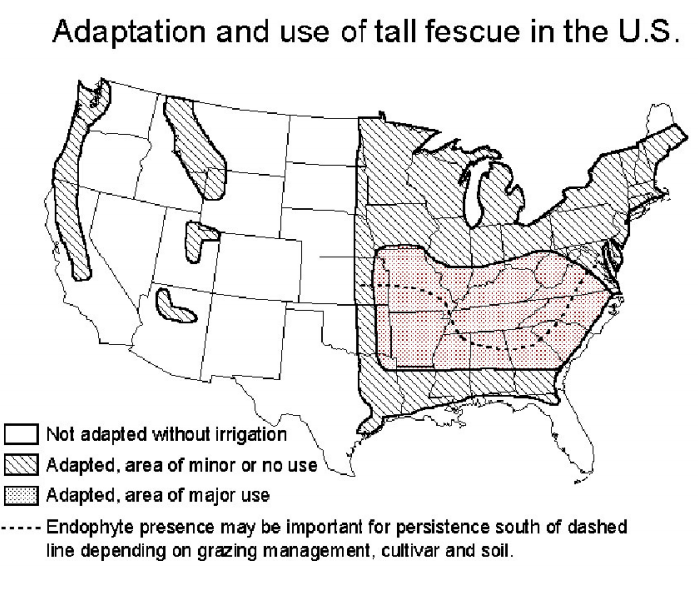 Figure 1. Adaptation and Use of Tall Fescue in the US. Shaded areas represent areas where Tall Fescue is of both major and minor use.

As mentioned above, the alkaloids produced by the endophyte cause several problems for grazing livestock. There are several management options available to producers who graze cattle on fescue pastures to help lessen or alleviate the symptoms of fescue toxicity. These include replacing infected fescue pastures, pasture rotation, dilution and supplementation.

The total replacement of infected fescue pastures can be difficult as well as expensive. When attempting replacement, take a “spray-and smother” approach. First, spray the infected field with an effective herbicide, and second, seed a cover crop to smother the field; then, reseed with the desired new forage crop. The smother crop should be a fast-growing annual forage (such as millet or sudangrass in the summer or wheat, rye or oats for fall planting). It is usually a good idea to renovate small portions of the farm in stages.

Rotating cattle off of fescue pastures during the hot summer months increases animal performance for several reasons. First, because fescue is a cool-season forage, it stops growing during hot summer months. Rotating cattle off of fescue and onto growing, warm-season pastures simply gives them more to eat. Secondly, high temperatures seem to intensify the negative effects of endophyte toxins. Moving cattle to non-infected pastures eliminates this interaction. Cattle need to stay off of infected fescue pastures for the entire summer to reap any benefits; taking cattle off for only a few weeks at a time will not greatly reduce the summer slump symptoms.

Inter-seeding infected fescue pastures with legumes helps to dilute the total amount of toxins ingested while also increasing the overall nutritional content of the pasture. These legumes must be managed to allow for reseeding each year — and even with special management, many need to be manually reseeded periodically. It is also important to fertilize for the legume (limiting the amount of nitrogen) in order to allow the legumes to thrive.

Research has shown that copper levels are lower in endophyte-infected fescue vs. endophyte-free fescue when grown under identical conditions. These differences are most pronounced late in the growing season (see Table 2). These findings support observations of decreased copper status in cattle grazing infected fescue. In a study conducted in Virginia, cattle grazing endophyte-infected fescue exhibited a decreased copper status as opposed to cattle grazing endophyte-free fescue. However, the magnitude of this decrease was greater than the difference between the forages. This demonstrates that the endophyte not only decreases the total amount of copper present in the fescue but also negatively affects the bioavailability of copper for the animal. This makes sense when you consider that the typical symptoms of fescue toxicosis closely resemble those of copper deficiency. These symptoms include rough, discolored hair coats; winter coats that are slow to shed out; decreased conception rates; increased days open; hoof problems; and depressed immunity. For all of these reasons, a lowered copper status plays a large role in fescue toxicosis syndrome. Proper supplementation with a high-copper supplement can help alleviate some of these fescue toxicity symptoms.

Why is copper so important?

Proper copper nutrition is essential for a healthy immune system in cattle. Copper is needed for the proper development of antibodies and white blood cells, in addition to antioxidant enzyme production. Copper-deficient cattle are more susceptible to infections and do not respond as well to vaccinations. In addition, they tend to be less resistant to parasitic challenges. Studies have shown that cattle receiving proper copper nutrition tend to be less susceptible to infections and have less severe infections when disease does occur.

Reproductive problems cost beef producers about $15.00 per cow per year. This translates into $750 per year for a 50-cow herd. It is widely known that copper deficiencies in cattle result in reduced reproductive efficiency and performance. The typical copper deficiency symptoms include decreased conception rates, increased days open, increased cases of retained placenta, delayed puberty, and increased repeat breeders in cows and decreased libido and semen quality in bulls.

Proper copper nutrition in pregnant females is critical for the health of newborn calves. Newborns are very dependent on the copper acquired during the pre-natal period, since milk is a relatively poor source of copper. Calves use the copper acquired during the pre-natal period to meet their elevated copper demands during the first few months of life. Additionally, the copper status of the dam is critical to the production of high-quality colostrum. Colostrum provides passive immunity for the calf until its own immune system develops fully. Also, copper nutrition has been shown to be an important component in a newborn’s ability to withstand cold stress. Calves born to copper-deficient cows experience increased death losses, reduced growth, reduced immunity and poor production efficiency.

Stress increases an animal’s mineral needs and tends to exacerbate any existing mineral deficiencies. This is especially important with weaned calves. Studies have shown that copper-deficient calves have more health problems, gain weight less efficiently and have lower net returns. For this reason, it is vital that calves receive adequate mineral nutrition BEFORE weaning, because even a proper mineral program cannot overcome existing mineral deficiencies once stress sets in. Calves going into stocker or feedlot situations will perform better when they have received adequate copper nutrition prior to weaning.

How can I help my cattle avoid fescue toxicity symptoms?

Unfortunately, there is no silver bullet that will allow you to avoid the negative effects of the fescue endophyte in all situations. However, by using a combination of the management techniques mentioned above in conjunction with a good mineral/vitamin supplementation program, you can reduce the negative impacts of fescue toxicity on your cattle herd. There are a variety of supplement forms available to match your management style and the needs of your cattle, including pressed blocks, low-moisture blocks and loose minerals. Look for the additional magnesium in ULTRALYX® Fescue Balancer pressed blocks, either with or without added protein. The ULTRALYX® Fescue Mag LMB and ULTRALYX® Fescue Balancer with Mag mineral are both high-quality supplements containing mineral and vitamin levels ideal for cattle on fescue forages.

Visit your local ULTRALYX dealer for more information on our available ULTRALYX products.