Internal parasites create an economic burden on cattle producers. Internal parasites in cattle reduce feed intake, reduce average daily gain and alter the animal’s immune system. Expensive nutrients fed to sustain cattle are diverted to sustain the parasitic organisms instead. Parasitism is classified as either clinical or subclinical. Clinical parasitism means that the body is overwhelmed to the point that disease symptoms are present (anemia, edema, diarrhea, rough coat, etc.). These symptoms are easier to see and treat. However, if one waits until clinical symptoms appear, the damage has already been done and the animal has been inefficient for quite some time. Whereas, subclinical parasite infections do not show outward disease symptoms, but the animals are less productive (lowered milk production, reduced weight gain, altered carcass composition, reduced conception rated). The time to deworm is in the subclinical stage before major damage has ween done and money has been lost due to poor productivity.

In general, younger animals and animals under stress are more likely to be negatively affected by parasites. Mature cattle acquire some degree of immunity. However, mature cows near calving time are very susceptible to parasites as their own immunity is suppressed due to the pregnancy. Also, bulls are more susceptible to internal parasites than cows. 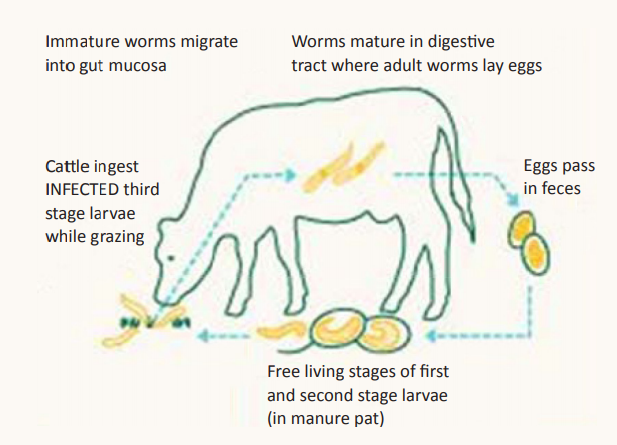 In order to control internal parasites, one must understand their lifecycle and how they are transmitted to cattle. Luckily, most of the economically important internal parasites (roundworms, stomach worms, barberpole worms, etc.) have similar life cycles (see figure 1). The adult nematodes mate and produce eggs within the host. These eggs pass out of the gut in the feces. The eggs hatch, and the larvae go through several stages before they reach the infective stage. This infective stage migrates from the manure pat onto moist grass (see figure 2) where it is consumed by the host then the larvae mature into adults, completing the lifecycle. It is important to note that these larvae need moisture (from rain or dew) and soil temperatures of 55° - 85° F to swim up the blades of grass. As the grass dies, the larvae move back down into the soil. Cattle do not pick up larvae from dry pastures. Thus, the warm, wet condition we’ve experienced this summer have been ideal for internal parasite transmission. 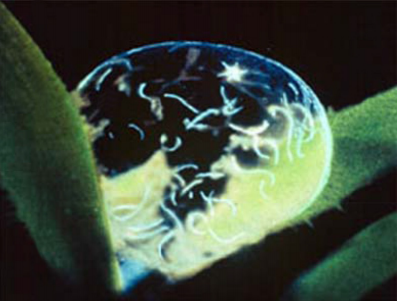 Figure 2. Infective larvae found in a drop of dew. (Taken from Langston University).

Control of internal parasites is a never-ending battle that entails a combination of pasture management and strategic use of anthelmintics. Control should be aimed at reducing exposure to infective larvae and disrupting the life cycle. Control practices include the following:

There are many anthelmintic products on the market to choose from. When choosing a dewormer consider the following: 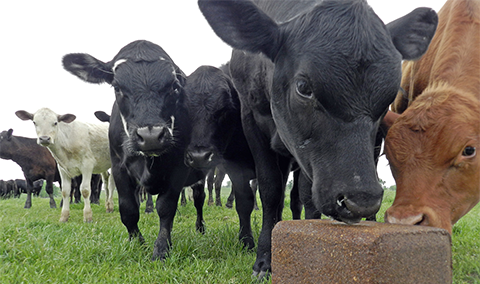 Figure 3. Self-fed Safe-Guard® 20% Protein Dewormer Blocks offer a deworming option that doesn’t involve running cattle through chutes. This could be an ideal method for heavily pregnant cows or producers without access to chutes or working facilities. Carefully read label directions or consult with your local veterinarian to see if this method is right for you.

Visit your local ULTRALYX dealer for more information on available ULTRALYX products or call 1-888-718-3493 to speak to an ULTRALYX representative.